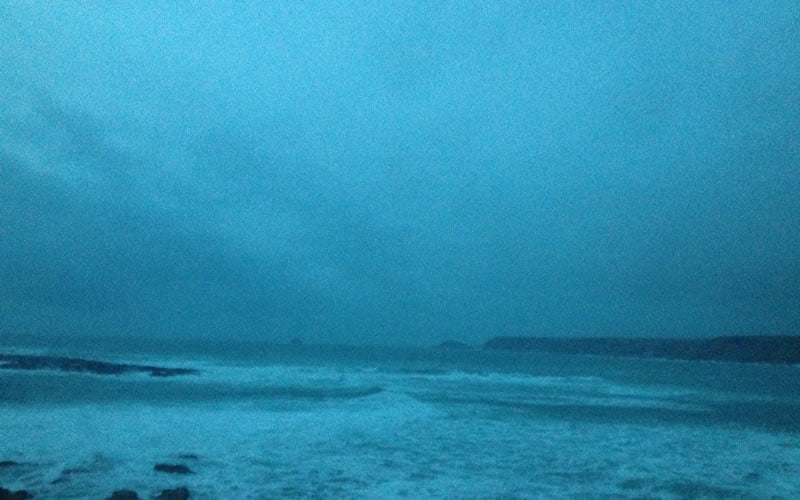 BIGGEST WAVES ON EARTH HIT THE WEST! Eye catching headlines in the Western Morning News yesterday, (westernmorningnews.co.uk) predicted 40ft waves rolling in at Sennen Cove â€“ apparently the best place to see nature at her most furious! Left the desk and the laptop â€“ this was too good to miss! Drove a good hour or more down to Lands End and swung off to Sennen Cove. Quiet after the half term break, but not so the pub â€“ â€˜The Old Success Innâ€™ even in the late afternoon had a log fire lit, families in with their babies enjoying a glass of wine, locals propping up the bar, and a man on his laptop enjoying his pint. Most distracting as supposed to be wave watching, met some lovely people and missed most of the waves! Â The menu was tempting but a casserole in the oven at home beckoned, but it would have been very easy to stay.

Didnâ€™t get far enough along the cliff path to take a picture of the giant waves, but the even the beach looked pretty spectacular! Although WMN today did say that the waves were not as big as expected!

A long, long way down west â€“ but if you crave peace and tranquillity and are happy with blustery walks and a good book â€“ a great place to live or buy a holiday home. Â For as little as Â£134,000 you can buy a one bed flat with a view, Â£300,000 would get you a 3-bed terrace and if you could stretch to nearer the Â£700,000 mark you could own a fabulous 3-bed apartment a stoneÂ throw from the beach!